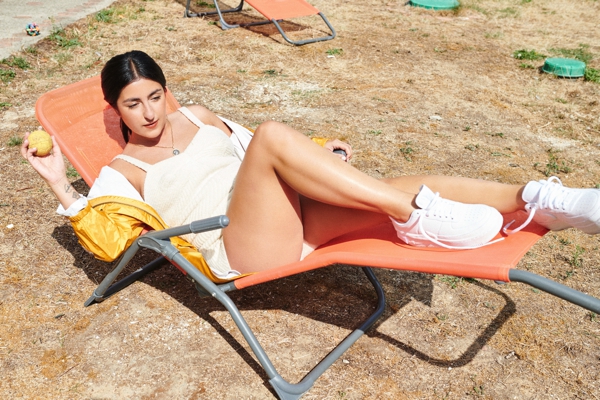 Nili Hadida, formerly one half of the French folk-pop outfit, Lilly Wood and the Prick, is today sharing the ethereal new video for single, ‘Another Drink’  This is the latest track to be taken from her roundly praised, self-titled debut album (out now via Believe Digital), which is produced by Christian Rich (N.E.R.D, Diddy, Lil Kim) and mixed by Jimmy Douglass (Björk, Kanye West).

Directed by Gabriel Boyer, the new video mirrors Hadida’s subtle electronica with lucid visuals. Speaking about the track – informed by ideas about how we seek out excess in order to offset the pressures life presents – Nili says: “Vocally, this song took me further than i had ever been. It’s an ode to partying and the dark side that we all have within us.”

Boyer says of the creation of the video; “It is an introspection – a journey into our inner selves. Nili’s tribulations are torn between dream and reality, in a movement of come and go, she plunges into it. These loops repeat endlessly, and we transcend time with her. Nili brings us into unknown, blurred territory – posing the question: Who am I ?”

Lilly Wood and the Prick quickly rose to success over the course of a decade, releasing three albums (two of which went gold in France) along the way whilst securing a string of hit singles, including the Robin Schulz remix of ‘Prayer in C’ (a track that would receive 3.5 million sales and achieve number 1 in France). Nili Hadida will support the new album release with UK dates, these to be announced shortly.

Watch the music video for ‘Another Drink’ below”