Watch the video for The Lovely Sparrows’ ‘Shake The Shadow’ 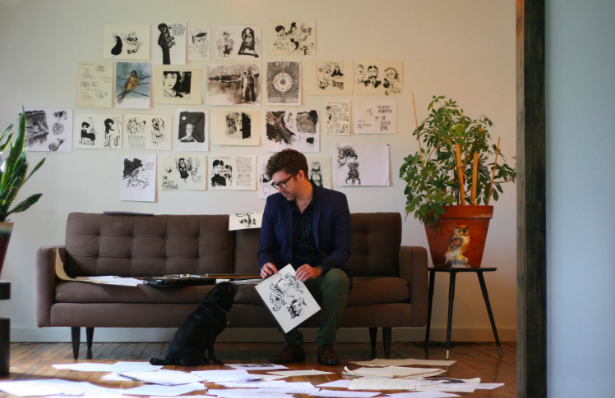 Last fall, Shawn Jones revived his long time musical project, The Lovely Sparrows, and released the first new music from the band in nearly seven years. Focused on not letting The Lovely Sparrows disappear for that long again, Jones teamed up with longtime creative partner, Katie Green, to make the video for the title track, “Shake The Shadow.” The song merges the past sound of the band with a more forward leaning direction; there are woodwinds and finger picking of classic indie folk, but the song incorporates synth swells to add a layer of mystical fog to the song. About the video, Jones had this to say:

“The video was at least partially inspired by my love for Harry Houdini. I am fascinated by the fact that later in life he became a reluctant skeptic, and debunker of hoaxes and frauds. To me there was this beautiful melancholy subtext that he was always hoping to be proven wrong. So this video answers the question, “is there any real magic?” and the answer is yes (with a wink).The occult, mysteries of the night, the Ouija board- these were all things that intrigued me when I  was really young. Probably the result of letting a weird kid who’s really into Indiana Jones check out library books about anything they want.”

The Lovely Sparrows have always been a transmigratory band. What started in the 00’s as a ragged combination of Sonic Youth fuzz and Guided By Voices verbosity has blossomed over the years into a homespun, obtuse project for Austin-based songwriter Shawn Jones. Following the release of the Take Your Hats Off You Godless Bastards 7”, Jones released the debut Lovely Sparrows EP, Pulling Up Floors, Pouring on (New) Paint, on Abandoned Love Records to wild acclaim. Follow up full length Bury The Cynics gathered praise from Pitchfork, Rolling Stone, SPIN, Paste, and Billboard. Lengthy touring and notable stops along the way included Pop Montreal, CMJ, La Blogothèque, and Daytrotter.

The Lovely Sparrows’ second LP Shake the Shadow arrived last November after a seven year hibernation. A delay largely in part to Jones’ exodus from Austin to the woods just outside of Lockhart, TX to rebuild an old house, and regain his bearings. During this time, Jones quit teaching, returned to grad school to pursue Music Composition and immersed himself in the works of Bartok, Eno, Ives, and Reich while simultaneously co-developing a magical realist video game. The songs, in turn, became looser, more of a sound collage than before, as a reflection of these blurring influences and tastes.

Shake the Shadow is an album of dualities, and Jones casts himself as both believer and skeptic throughout. References to the Church of the Night, reclusive animals, and the neon carnival glow of impossible highways reveal this longing to pull back the curtain in a Houdini-like search for the spark beyond the void- a moment of true connection, or of finally feeling settled, if temporarily- that are often only revealed in the quiet rituals of the mundane. Has Jones shaken the shadow? No. But he’s getting closer. Jones and company will head back to the studio to track LP 3 mid February with producer Jonas Wilson.