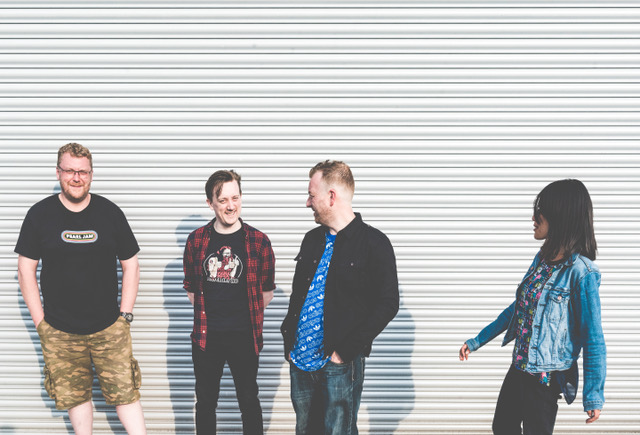 As the release of their latest EP inches into view today HELLO COSMOS  let the fireworks fly a little early by unveiling a fresh cut from the record: ‘Frequency Fields’.

Hallmarked with the transformative soundscapes and star-scudding sonic ingenuities that definitively blueprint the output of this Manchester collective, ‘Frequency Fields’ arrives as a tantalising forecast of the Run For President EP that impacts on 4th July 2019 (Via Cosmic Glue Records).

Given its first spin by BBC6 Music’s Chris Hawkins, the DJ hailed the band’s latest saying: “[There’s] Something addictive about the lead-singer’s voice. A band who go big on statement and protest. A rabble rouser with lovely poppy harmonies that temper the anger.”

Taking in the astral plane straddling psychedelia of the 60s, the low slung baggy-fied rhythms of the Mondays and the punch packing post-punk clout of the Fall, ‘Frequency Fields’ intercepts the disparate messages of trailblazers aeons past and re-routes them into a explosive new transmission of their own design.

Though it appears it’s not just the music that gazes to the heavens for its ideas, as Ben Robinson reveals the divine inspiration behind the enigmatic spoken word and electronic codings that sprawl across ‘Frequency Fields’:

‘I wrote the lyrics while on a tour of the sistine chapel listening to Lost Colours, wasn’t too popular with the tour guide with my headphones on all the way round… There’s also noises we recorded from an app on my phone that simulated classic Nintendo games power ups!’

‘Steve added the bass line once the rest of the track was down, it brought it to life in a whole new way.’ says Robinson. ‘Ironically given it’s my instrument it’s actually the best bass line on the upcoming album.’

‘Frequency Fields’ will feature on the band’s highly anticipated upcoming collection, the Run For President EP. As to be expected from the collective, the EP features a huge collection of outsider musicians, many from the thriving Leeds scene, with guests including Girl Sweat, James Smith (Post War Glamour Girls & Cruel World), Emma Mason (Galaxians & Lost Colours), Angela Chan (Lanterns on the Lake & Tomorrow We Sail) & Jack Simpson (Hyde Park Book Club) plus production and mixing at Greenmount Studios courtesy of Jamie Lockheart (Mye Mi), Rob Slater & Lee Smith. A remix by the infamous producer extraordinaire Jagz Kooner (Sabers Of Paradise), also proves to be an irresistible bonus. Jagz is renowned for production work with Primal Scream (Swastika Eyes), Bjork, The Prodigy & The Chemical Brothers plus his crossover remixes for Oasis, Kasabian, Soulwax & many more.

Plugged directly into the Radio Clash antenna, Manchester collective Hello Cosmos will continue their sonic bombardment with another post-punk and indie-dance assault on the senses and consciousness. Half dreamy yearning, half volatile, scattergun narration, lead vocalist Ben Robinson sets out a blueprint of progressive commentary on the Run For President EP.