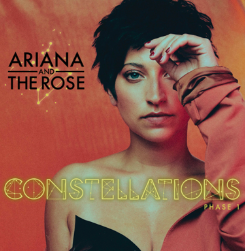 Ariana and the Rose drops the first phase of her two-part ‘Constellations’ EP (part 2 out in early 2020), cementing her deserved place as one of pop music’s stars-on-the-rise.

The four-track EP is a versatile taste of her critically acclaimed music catalogue that has made the Brooklyn multi-hyphenate a nightlife staple in NYC and one of the most exciting new voices in the pop galaxy.

With a “vibrant, club-ready” (Consequence of Sound) sound that is effortlessly addictive and undeniably current while still paying respect to the synth pop and new wave of yesteryear, Ariana and the Rose is not just power pop with earworm hooks, but also with big heart and emotional integrity (also demonstrated by her often using her live performances and platform to promoteinclusivity, body positivity, and social justice).

Of the EP, Ariana said “These songs are a collection of moments inspired by what it means to feel empowered and independent inside of our relationships. I want the EP to take people on a journey through choosing yourself and what it looks like to come out the other side of that.”

The EP’s first single is “You Were Never My Boyfriend”, which builds from its unassuming humble intro into an ingenious kiss-off anthem that showcases the “kaleidoscope” that is Ariana and the Rose: “she’s honest and can be stripped bare one moment, but isn’t afraid to go big, to experiment, and feel glam in the other” (Earmilk).

The EP also contains “True Love” which has become a live show fan favourite due to its danceable groove and message of celebrating love (Ariana partnered with LOGO to debut its PRIDE-inspired video), as well as “Honesty” a brutally vulnerable self-reflected ballad about facing both the truth in your heart and of your actions. Lastly, the EP includes an unexpected take on *NSYNC’s 2000 hyper smash “Bye Bye Bye”, turning the energetic pop hit about bidding adieu to an ex-lover into a dark, stirring slow-burn that enlightens the source material’s anguished lyrics through Ariana’s hypnotic vocal performance.

The ‘Constellations’ (Part 1) EP follows the release of the celebrated stand-alone singles “Lonely Star” (a galactic message on unity with an equally sci-fi video), her unanimously praised disco bop “Night Owl” (that received positive reactions from Consequence of Sound, Time, Refinery 29, Nylon and many more), the most recent massively successful instalment of her self-curated immersive music nightlife party “light + space” which took place in Bushwick earlier this month, and a performance spot at the 25th anniversary of the Vans Warped Tour just the other weekend.