SPIKE FUCK releases the “Smackwave” EP on 12” vinyl, a collection of deeply personal songs which have gained cult status, including the recently released “Body By Crystal” and radical opener “Junkie Logic”.

Drawing from a difficult period of heroin addiction, Spike creates beautifully infectious rock and roll songs which describe, with unflinching candour, the peaks and valleys of that lifestyle. She effortlessly condenses a number of disparate styles and genres across five tracks – country and western, Triffids-style jangle, brittle new wave – into music which thrillingly broaches the gap between stark confessional and rock and roll. While undeniably stirring and infectious, this isn’t aiming simply for the charts. Rather, there is a full-throttle, high-stakes, facing-up-to-God urgency running through its veins, one which resets the very notion of what pop music can be.

Spike knits together sense, memory, historical and cultural artefacts, and autobiographical documentation in an attempt to record a challenging – and thankfully now closed – chapter of her life.

Recently signing to Partisan who are responsible for hoisting the likes of Cigarettes After Sex and Idles to fame,  SPIKE FUCK first came to prominence as a striking figure in the explosive flourishing of musical creativity that has recently occurred in Melbourne.

SPIKE FUCK is challenging the meta-narratives we tend to take for granted in media and carving out a place for herself as an Australian artist in the early stages of the 21st century in an increasingly atomized and fragmented yet globalized society. 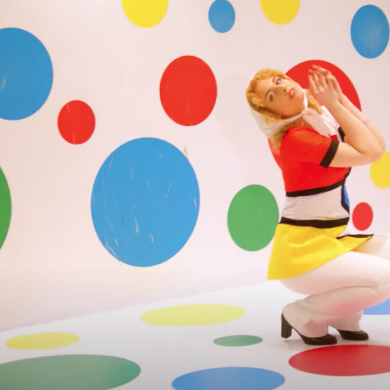