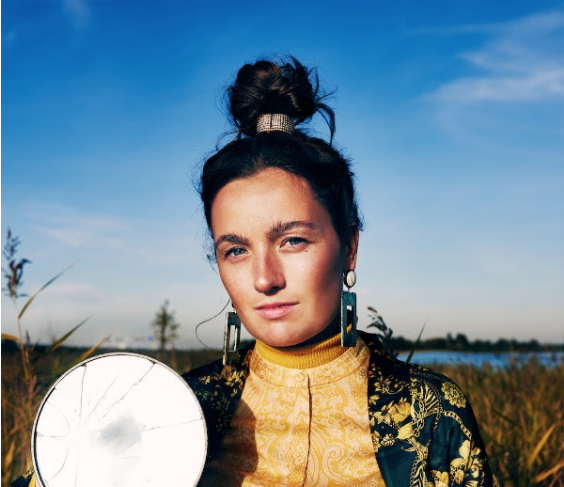 Electronic-pop artist HEBE  was born into a family of artists, her father is a film and documentary director, her mother is a theater designer and teacher at ​The Rietveld Academy​ and her brother is a visual and light designer. This helped pave the way for her career in music. After HEBE had graduated from the Conservatory of Amsterdam in 2014, she released her 6-track debut EP ‘The Beginning’​ in October 2015 at the age of 24.

HEBE’s​ newest single ​Hunting Me​ is a groove based ​Electro-Pop​ song. In the verse she focuses with a ​grounded, warm voice​ and minimalistic production on telling her story from where the melody fluently moves to the ​powerful, uplifting​ chorus.

As a young girl, I remember sitting in the back of the car. Me, my brother and parents were going on holiday to France. I had a discman with two cd’s and I would play them over and over, looking through the window dreaming away (most of the time dreaming I was in a film drama, leaving everything behind and starting over in some new place).

I loved to pick the songs for these two cd’s, carefully deciding which one would best fit for a two week listen. These compilations would see Joe Cocker and Buena Vista Social Club, but also John Mayer and Nelly Furtado.

My interest in music production came later, I’m not very good with technical stuff, and I felt craftsmanship on an instrument was most important. After I graduated from the conservatory I started talking to producers about making my first record and while talking to them, I realised there were still a lot of choices to make even though the songs and arrangements were ready. I started working with producer Huub Reijnders, he told me to make a ten song playlist of productions I liked. I think that was the first time I really listened to the way a song was produced, what choices they made in sounds, type of drums and instruments. All the hours sitting next to him has given me so much, looking over his shoulder and trying to understand what I liked and disliked.

It would be impressionistic and in balance. Many shades of blue and use of only two other bright colours. The painting should not provoke, but be open for interpretation. A certain simplicity if you would look from a distance, but multiple, deeper layers once you look up close.

The album ‘Van Morrison and the street choir’ by Van Morrison is an album I listened to since I was very young and  brings so many childhood memories. After all these years, I still love this album. Van Morrison has been one of my biggest influences as a songwriter. On this album all songs are uplifting/danceable and sad/introvert at the same time, which I think is a beautiful balance.

Other’s that influenced me amongst others are D’angelo, his vocals and band is super groovy,  his songs are sexy and productions sophisticated. Hopefully he will release another record in the near future.

One of my favourites also: Bon Iver. He touches me right in the heart with every song.

James Blake’s new album ‘Assume Form’. Amazing record, his love songs are very well written, cute without getting cheesy. Also nice to hear in his music, that he is in love!

‘Graceland’ by Paul Simon, actually all of his repertoire, because I have been reading his biography, so wanted to listen to all his songs again with some new background information.

There are two different songwriting flows for me. There’s the process when I’m writing for somebody else. Before the whole writing starts, I try to understand what fits the artist or person (sound, theme, tonal range). When I have a clear picture, I make a pallet for theme and lyrics and reference artists. From there I start with melody and chord progressions.

This songwriting process has some sort of structure, while writing for myself has no structure at all. I try not to force myself when it comes to writing music for HEBE. I mostly start a new song with just a single lyric- or melody line that came to me at night or on the bike. From there I start vibing on these words with different chords, new melodies and I try to make other lines that fit the first line. Sometimes I finish a song in an hour, sometimes it takes two years to  finish a song.

My mind has to be open for creativity, when I’m really busy, stressed out or in the middle of a release, I can’t write for a certain period. That part of the brain sort of shuts down when there is too much going on, especially when there is a lot of practical stuff that I need to do. It happens that a melody-line comes to me or I read a nice lyrics that I want to use for a song, but if I’m not inspired, I record it on my phone and leave it at that.

However when my mind is open and relaxed, creative juices come in all forms. On the bike, at night when it’s dark,  when I see a poster with a nice line or when somebody describes something in a beautiful way for example. I think I wrote most of my songs when I was a bit sad, but as long as I’m open for creating something there are a million forms for it to start.

Art and business is a tricky one. Of course I don’t like the fact that it’s so money driven and that artists most of the time come out pretty shitty from deals.

The concerts I will always remember, are the ones that gave me a feeling of power, made me want to cry somewhere in the middle and by the end of the concert let me go home with a lot of energy. Music can be healing and if my audience would in someway feel that my music gave them some power, reflection or healing, I would be very grateful.

Once, after a concert in Alkmaar,  a woman came up to me. She told me my song ‘I knew it from the start’ was the song of her relationship with her husband, their relationship was not an easy one, but they had accepted that and ‘I knew it from the start’ described their struggles. Her husband had died a couple of months before and they played the song at his funeral, they wanted to see me live together, but they weren’t able to anymore, now after some months she decided to see my show alone.

That somebody feels a song you wrote, is theirs, is the biggest compliment I can ever receive.

All these things are not part of the creative process of being a songwriter and artist, but are company management of a start-up. I’ve learned a lot along the way, so I’m grateful for all these experiences, but success for me at this point is being able to have the freedom to decide how you want things and when you want them.

I’ll be releasing an acoustic version of Hunting Me the 6th of december. I’ll be in Morocco for a collaboration with a Ugandan artist and I will be in Uganda in the beginning of 2020 to write new music. So a lot of travelling, before I release my second single in February 2020. The title of the second song is still a surprise, but it’s about a love affair at a long distance, a song very close to my heart.

In May I will release my album with a show in Amsterdam and London, so I’ll be coming your way soon!

I’m not done yet

This is a customizable subscription pop-up to sign up your visitors to your newsletter
More Stories
Hunger’s call to ‘Light It Up’ via new track.