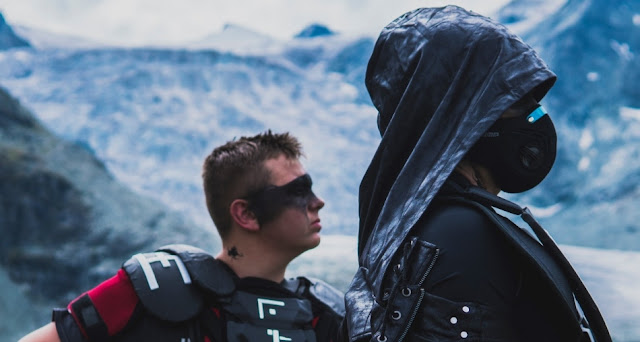 Saint Mars, an international indie rock band, have released the music video for their ‘Pacific State’ single. The music video is filmed in the scenic mountainscapes of Switzerland and features lead singer Tryzdin, head honcho Marc Darcange and rap star from Bristol, Jethro “Alonestar” Sheeran.
Tryzdin shares the deep connection he carries to the making of the music video: “This video means a lot to me. I was 13 and was making my first ever trip to Switzerland. I will never forget the nerves and the anxious emotions I felt on the way there and the rest of the trip. Pacific State is a video that will give you post-apocalyptic vibes. I see it as a world after WW3 and they are all trying to survive as well as find survivors that may have been lost in all the wreckage.  We come across a girl on the side of the mountain and Marc sends me to follow her as he heads back to tell the others about our discovery. But as I follow her, I notice she has a map that is leading her right to us. I head back to the base to tell the others. We hear the castle doors creak open…. and we realize that it is the same girl we had seen on the mountain, we stand guard but not for long as we realize that the girl that we had been following was just a little girl trying to find a safe place to call home all along.”
Does the video leave you wanting more? Fear not, for this is not the first time Saint Mars have released a music video with Jethro “Alonestar” Sheeran. You can check out one of their older music videos below:
Follow Saint Mars:
Website – Facebook –  Twitter  – Soundcloud – Youtube – Instagram – Spotify
Start typing to see results or hit ESC to close
singer music video song Indie pop pop
See all results

This is a customizable subscription pop-up to sign up your visitors to your newsletter
More Stories
Pitchfork Music Fest Paris announce after parties line up including SOPHIE, Lotic, Or:la and more