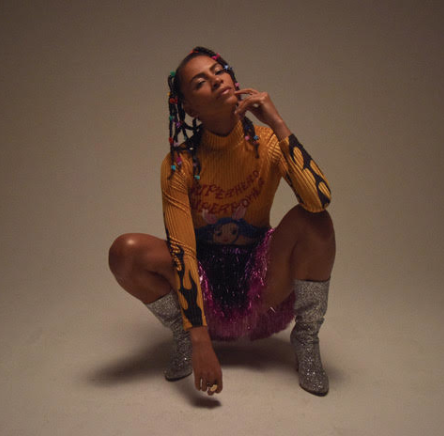 French-Caribbean singer – ADELINE – confirms the release of a new EP:  Intérimes, on 10 July 2020.

7 Songs of future facing, genre-transcending pop of the highest calibre, Intérimes is further confirmation of an artist daring to break the mould and destined for greatness.

Teasing a taste of the incoming EP, Adeline has revealed three of its many highlights: the sultry ‘Middle’, plus most recently the dusky slow-jam of ‘Twilight’ and the disco-flecked strut of: ‘After Midnight’; the latter of which both arrive with intoxicating videos.
Announcing herself as a blinding new light on the Funk and neo-Soul scene with her s/t debut in 2018, Adeline is returning in 2020 with a remarkable new collection. Forging platinum pop from a white-hot crucible of styles and genres, the songs of her new EP Intérimes each shine irridescently with the sounds of funk/soul/neo-soul/R&B and so much more.

“This EP feels like a new chapter musically.” says Adeline. “I’ve evolved a lot as a producer and songwriter in part from performing live so much with my band. The music is a lot more organic, almost all live instruments which is why the music can feel a bit old school at times. I went back to my roots in soul, neo-soul, funk and R&B.”

With its title translating to English as “in the meantime”, each track on the EP seeks to capture the ambience of a different time of the day. From the lazy-morning leanings of  ‘Just Another Day’; to the sultry, nocturnal reflections of ‘Twilight’; the late-night grooves of ‘After Midnight’; and the languid, down-tempo jams of ‘Planet Caravan’ (a radically re-worked Black Sabbath cover) and ‘Si C’est Pour Jamais’; it’s a release that sees Adeline take listeners through an unforgettable day-in-the life they will be yearning to relive again and again.

“I wanted something that has to do with time.” Adeline adds. “All the songs on the EP have to do with different times of the day… It also represents conflict, the feeling of being “in between” as is portrayed in a few songs on the EP.”

Inspired by the complexities and nuances of love in all its expressions, from the impossible, to fading, to complicated, to new, to hidden, and whimsical; lyrically the EP finds Adeline reaching into her soul and exploring deep, personal and reflective new territory as a songwriter.
“I wrote from a more personal place than before” she muses. “I am still working on finding the balance between the performer, the songwriter, the singer, the bass player and the producer. Each one of them is a side of me that takes part in the creation of the music and I feel happy that I was able to create a bed of music that could lend itself to that sort of emotion.”

Since leaving her post as lead singer of nu-disco outfit Escort, Adeline has quickly proven herself to be one of the hardest working women in music. A prolific singer, songwriter, and bass player who produces her own music (with co-producer Morgan Wiley), she is “never not working”. With her luxurious voice, head-spinning compositions, funky bass playing, renegade personal style, and hypnotic live shows; Adeline has already gained a reputation and fanbase across the globe.

Released in 2018, Adeline’s critically acclaimed self-titled debut album garnered praise from Vogue, NPR, Refinery 29, Rolling Stone, The Fader and many others. She has toured globally, sharing the stage with such notables as Anderson .Paak, Lee Fields, Chromeo, Big Freeda and Natalie Prass, as well as making recent appearances at Afropunk, Funk on the Rocks (Red Rocks) and Winter Jazz Fest. When she’s not making and touring her own music, Adeline plays bass in CeeLo Green’s touring band.

Already a rising name in the fashion world too, Adeline recently featured in Victor Glemaud’s Fall 20 size-inclusive fashion collection, launched via a virtual party featuring Adeline, models @preciousleexoxo and @indira, and art curator @mu-seummammy, all dancing to another new Adeline single, “Middle”. She is also featured in the new Marc Fisher “Step + Repeat” fashion campaign and performed as part of the COLORSxSTU- DIOS “HOME/BRED” video series earlier this year.

During a turbulent few weeks for America and the wider the world, Adeline has also thrown herself fully into the Black Lives Matters campaign. Standing shoulder to shoulder with millions of others in the fight against racism, Adeline has taken to the streets of New York to passionately protest and perform. As a Black Parisienne living in Brooklyn, the prejudices brought to light in recent days have cut deeply, with the artist vocally discussing her own experiences in a recent appearance on the Twisted Times podcast and on Instagram.

Ready to soundtrack a long, hot summer ahead, with an effervescing collection of new tracks, Adeline will release the Intérimes EP on the 10 July 2020.

With all tracks produced by Adeline and her production partner Morgan Wiley, ‘Twilight’ and ‘After Midnight’ were co-written with Jonathan Singletary. The EP also features the steady playing of Jaleel Bunton on guitar and Jim Orso on drums, with Adeline laying down the bass.