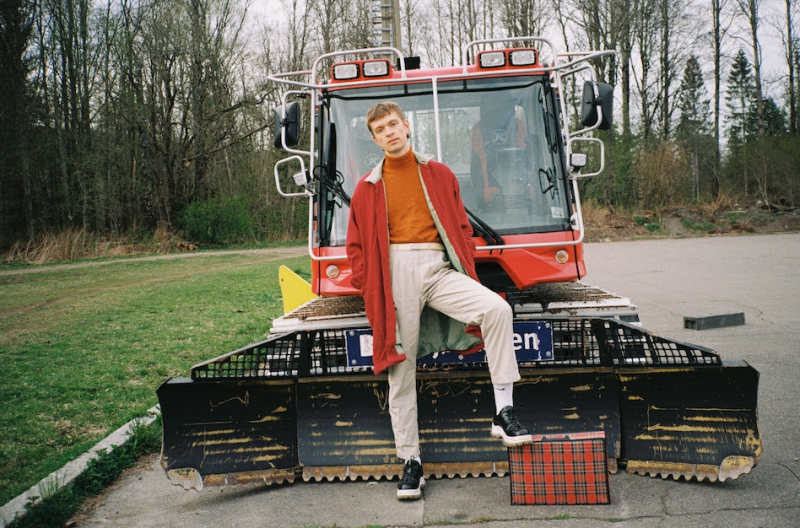 New single “a mistake” builds upon Lokoy‘s eclectic releases to date, this time leaning more toward his work as bassist for Stavanger punks Sløtface. A soaring indie-pop cut matching whirlwind instrumentals with emotive vocals, “a mistake” was born originally from one of Østebø‘s own demos, before taking it into Lokoy‘s home studio with the assistance of Sløtface guitarist Tor-Arne Vikingstad.

Speaking on how the collaboration came about, Lokoy said: “I first met Emilie when she was playing support for Sløtface a few years back and I remember all of us thought she was the greatest support band we’ve ever had. Earlier this year we met in my studio together with Tor-Arne and just kept cooking on Emilie’s demo. We added a ton of guitars, and some dirty bass-synths and drum machines and BOOM. It just fell together nicely.”

Adding more context to the lyrics, Oslo-based 20-year old Emilie Østebø said: “It’s nothing too complicated; it deals with the relationship between two people, the dynamic between them. Often I feel like songs are a parody of yourself. The chorus of ‘a mistake’ is sort of a parody of the self-indulgent things you imagine saying to a person you’ve just had a fight with. I wrote the melody of the post-chorus on guitar, but Lasse had the idea to sing it instead. The childish and sarcastic tone of that melody when sung perfectly communicates the petulance of the lyrics.”

Lokoy’s debut album Badminton, at its core, is a dizzying no-holds-barred exploration of pop. His futuristic, charming production the constant throughout; across the 15 tracks he brings to the table a host of exciting new Norwegian talent, including Nils Bech, Safario, Moyka, and Sofus (amongst others hidden in the credits…)

However, it’s on the album’s title track and emotional (and literal) centrepiece where Lokoy comes into his own. A candid guitar-led track dissecting Lasse’s relationship with his father; “What I wish the most is that all of our hugs are like the ones we share in ball courts” Lokoy laments atop of spiralling guitars and expansive production, providing an honest, playful examination of a father-son relationship.

In Lasse Lokøy you’ve got it all: bassist, singer, songwriter, producer, polymath and party-starter. Following previous collaborations and releases with some of Norway’s most exciting prospects (girl in red, Jimi Somewhere, dePresno), Lokoy has quickly become one of Oslo’s most in-demand producers and collaborators.

Beginning his solo career back in 2018 with his “Can We All Go to Bed” EP, he was swiftly praised for his unique production flair and sonic ambition, by the likes of NME, DIY Magazine, The Line Of Best Fit, Clash Magazine, Dork Magazine and more. Now with the impending release of debut album Badminton, Lokoy looks set to align himself with some of the most exciting young producers, not just in Norway, but in the world.

Lokoy’s new single “a mistake” with Emilie Østebø is out now. Debut album Badminton is out 22nd January 2021, via Lokoy (under exclusive license to Propeller Recordings).