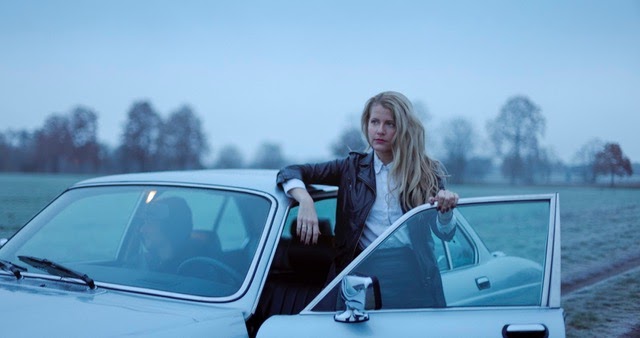 Image credit: The Ghost Of Helags

The upcoming single to emerge from ‘We Came From The Stars’ (out 12 March 2021), finds the Berlin-based duo’s definitive dream-pop sound taking flight.

Feeling inspired and emotional on the plane home after what had been an unforgettable trip to Japan, Teresa Woischiski began to capture the myriad thoughts and feelings coursing through her mind at that very moment.

“[Bye Bye Tokyo] was written on the airplane on the way home from Japan (Tokyo)” reflects Teresa. “While everyone was sleeping, there was this unreal vibe of being amongst hundreds of silent people in a bubble of sound high above the clouds.”

The result is a snapshot of that stitch in time; a final memento from an adventure that would leave a lasting impression on the band for sometime to come. “Bye Bye Tokyo, I’ll bring home the neon lights” lulls Teresa here, over a panoramic score of glowing synthesisers and skittering syncopated beats.

The Ghost of Helags are singer-songwriter and producer duo Teresa Woischiski and John Alexander Ericson. Hailing from Sweden and now located in Berlin, the pairing combine the dream pop sounds of their Scandinavian roots with the electronic nuances inspired by their newfound home and beyond.

Following directly on from recent single “Mary”, “Bye Bye Tokyo” is the latest in a series of sublime singles to emerge from a 12-track album confirmed for release on 12th March. Largely written in the days before “Coronavirus” was even a word, plus in the instances of relaxed relief between lockdowns this past year, ‘We Came From The Stars’ is a record with notions of adventure and escapism in its every fibre. From the wintery roads between Vienna and Prague (“Chemistry”), to the heat of a summer festival in Antibes (“Parallel”), gazing out over dusky Italian sunsets (“Night Summer Waiting”) to pensive thoughts in the shadows of The Great Mountains (“Mary”); each of its songs arrive like postcards from a world of free travel.

With their Lynchian cinematic-pop notably cut from the same velveteen cloth as contemporaries like Chromatics or Still Corners, ‘We Came From The Stars’ also sees the band broadening their horizons to pay homage to other inspirations including The Chemical Brothers and Kate Bush. Elsewhere, “In The Dark, Honey” finds them opening-up the floor to rising Brighton-based talent Hayley Ross who joins the band in a moving duet.

With their debut album now in sight, the long and twisting road that has led to its release is nearly at its final destination. ‘We Came From The Stars’ by The Ghost of Helags is out 12th March 2021 (via Warsaw Recordings); the view from the top, promises to be every bit worth the wait.