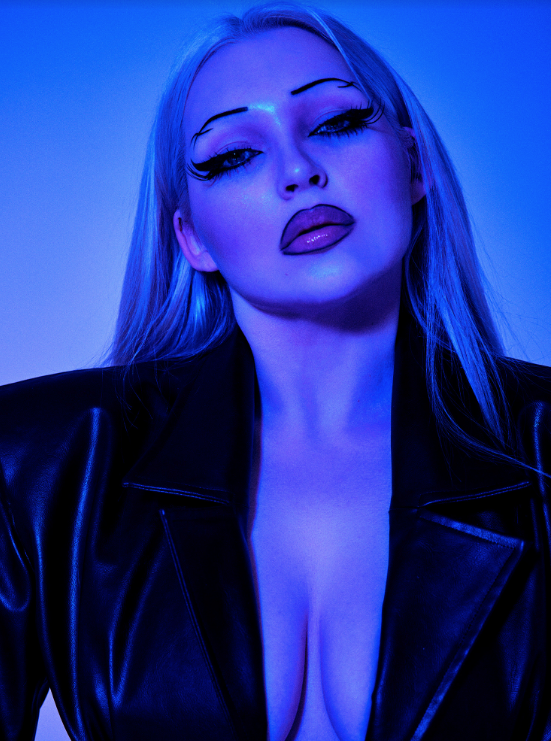 Stockholm based multidisciplinary artist COBRAH unleashes her long-awaited new EP into the world.

As giddily fun as it is deeply personal, COBRAH’s themes of sexual liberation might influence the sound and the image, but on a deeper level, these new songs fearlessly explore queer identity, mental health and the power of self-confidence. Take lead track ‘DIP N DRIP’, a dark and propulsive cyberpunk reflection,  weaving drum & bass and techno stabs with tongue twisting, rapid-fire vocals. “That song’s not actually sexual at all,” says COBRAH. “It’s more about how the struggle is real, how much of a fight it is to do all of this by myself.” The celebratory ‘GOOD PUSS’ follows, with its throbbing house beat and irresistibly seductive vocals. Across these 5 breath-taking tracks, which also include 2020’s bass-wobbling DEBUT and the anthemic cut GOOEY FLUID GIRLS, the stall is set for this new hyper-pop, multi-textured chapter for the rising star.

The songs that comprise COBRAH were written over the course of last summer, and with no lockdown in Stockholm, recording could take place at a studio in Östermalm in late 2020 with musical partner, producer Gusten Dahlqvist. The personal progression between her debut EP ICON and COBRAH is huge. “ICON was really about anxiety, and I think COBRAH is way more dominant. I’m a lot more self-assured, and I want people to feel that confidence for themselves when they listen to it. I want them to feel like they can do whatever they want, dress however they want, indulge in whatever they like. My feelings have always been that I want to make something that’s playful and fun, but dominant at the same time.” In the main, though, COBRAH is a testament to her own progression, offering fans another taste of what’s in store whilst always keeping the listener guessing.

When COBRAH released single ‘IDFKA’ in 2019, it was met with rave reviews; paired with a Swedish Grammi-nominated video that lent a striking visual language to the song’s lyrical struggle for self-acceptance, marking the arrival of a vivid new voice on the Swedish music scene. When she moved to Stockholm, the producer,  singer,  songwriter and visual artist immersed herself in the city’s queer and fetish scenes, a crucial breeding ground for the songs that would go on to form her thrillingly subversive and breathtakingly fresh debut EP, ICON, released via her own GAGBALL imprint. The five-track release was a club-ready tour-de-force, celebrated by taste-makers,  radio DJs and peers such as Charli XCX,  who joined her onstage when she performed in the Swedish capital in 2019.

COBRAH feels like the perfect statement of intent and yet another indication that things are about to go stratospheric for this future cult icon.  Tune in now.